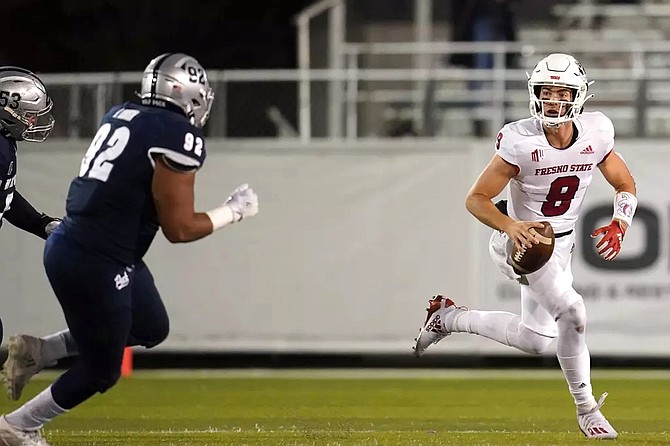 THE RIVALRY: Fresno State leads, 30-23-1, though Nevada has won eight of the last 14 since 2008. Fresno State’s edge in the rivalry is mainly due to a nine-game winning streak from 1934-1942 and eight wins in nine games from 1999-2007. One of the most important moments in Wolf Pack history took place in a 49-41 loss to Fresno State at Mackay Stadium in 2007, the game that signaled the start of the Colin Kaepernick era. Kaepernick came off the bench for an injured Nick Graziano to pass for 384 yards and four touchdowns and run for 66 yards and another score.

WEIRD WAR-TIME BATTLE: The Wolf Pack snapped a nine-game losing streak against the Bulldogs with a strange 7-4 victory on Nov. 3, 1945 at what was then called Mackay Field. Tickets were $2.25, though servicemen could get in for 50 cents. Fresno’s Hal Raley tackled Nevada’s Ebby Robertson and Lloyd Rude in the end zone for a pair of safeties and a 4-0 Fresno lead. The Pack won the game before a Homecoming Day crowd of 5,000 on a 16-yard touchdown catch by Stan Kitchner. The Fresno State team stayed in Carson City at the Arlington Hotel.

LAST YEAR’S MEETING: Fresno State beat the Wolf Pack last season, 34-32, on Oct. 23 in Fresno, the first of three frustrating two-point losses in Mountain West games for the Pack. The Pack cut the deficit to two on a 12-yard touchdown pass from Carson Strong to Cole Turner with two seconds to play but a pass to Romeo Doubs in the back of the end zone on the conversion attempt fell incomplete. Strong was 49-of-61 for 476 yards and four touchdowns. Doubs caught 19 passes for 203 yards and a touchdown. Strong’s 49 completions set a Wolf Pack record while Doubs’ 19 catches tied Nate Burleson’s (2002 vs. UTEP) Pack record.

HAENER HARRASSES PACK: Fresno State quarterback Jake Haener will make his third appearance against Nevada on Saturday. The senior torched the Wolf Pack for 485 yards and two touchdowns, completing 41-of-65 passes, in a 37-26 loss at Mackay Stadium in 2020. Haener completed 26-of-38 for 256 yards and two touchdowns in Fresno’s win over Nevada last year.

THE HEAD COACHES: Nevada’s 58-year-old Ken Wilson is 2-8 overall in his first season and still looking for his first Mountain West victory (0-6). Fresno State’s Jeff Tedford, who turned 61 on Nov. 2, was 26-14 as Fresno’s coach from 2017-19 before retiring for health reasons. He was rehired last December when Bulldogs head coach Kalen DeBoer left to become head coach at Washington. Tedford, like Wilson, is a former Oregon assistant coach. Tedford was the Ducks’ offensive coordinator from 1998-2001 while Wilson was a linebackers coach in 2020 and co-defensive coordinator in 2021 at Oregon. Tedford was also Cal’s coach in 2010 and 2012 when the Wolf Pack (with Wilson as an assistant) beat the Golden Bears at Mackay and Berkeley.

NEW NAME, SAME RESULTS: Fresno State wide receiver Jalen Cropper has a new name on the back of his jersey this season. Cropper is honoring his late grandfather Jimmy Moreno this season by wearing the name Moreno-Cropper on the back of his jersey. The wide receiver, though, has not legally changed his name to Moreno-Cropper, according to the Fresno State athletic department. Jimmy Moreno died on Aug. 7, 2020 and is the father of Jalen’s mother, Lissette Moreno. Moreno-Cropper has caught 64 passes this season for 828 yards and five touchdowns. Last year, he caught 85 passes for 899 yards and 11 touchdowns and now has 202 career catches for 2,450 yards and 21 touchdowns.

SIMILAR 2021 ENDING FOR PACK, BULLDOGS: Nevada and Fresno State each lost its head coach almost immediately after the 2021 season. Kalen DeBoer left Fresno State just four days after the regular season for Washington while Jay Norvell left Nevada for Colorado State nine days after the Pack’s regular season ended. Both schools then hired new head coaches (Wilson, Tedford) quickly. Wilson was hired four days after Norvell was announced as Colorado State’s head coach while Tedford returned to Fresno State just nine days after DeBoer was announced as Washington’s coach. Both Wilson and Tedford, though, did not coach their new schools in their bowl games later in December. Both schools turned to a running backs coach (Nevada’s Vai Taua and Fresno State’s Lee Marks) to serve as head coach in the bowl game. Marks, who is now on DeBoer’s Washington staff, and Fresno State beat UTEP, 31-24, in the New Mexico Bowl on Dec. 18 in Albuquerque while Nevada and Taua lost to Western Michigan, 52-24, in the Quick Lane Bowl on Dec. 27 in Detroit.

FRESNO STATE LAST WEEK: The Bulldogs beat UNLV, 37-30, in Las Vegas as Jake Haener completed 28-of-34 passes for 313 yards and three touchdowns. Jalen Moreno-Cropper caught eight passes for 164 yards and two scores, including a 66-yard touchdown with 8:47 to play.

HOME MEANS NEVADA LOSES THIS YEAR: The loss to Boise State dropped Nevada to 1-4 at home this season. This is the first season Nevada has lost four games in a row at home since 2000, when it lost its first four at Mackay (finishing 1-4 at home). A loss to Fresno State on Saturday would give the Pack its worst home record (1-5) since the new Mackay Stadium opened in 1966. The last time the Pack went 1-5 at home was 1964 at the original Mackay Stadium. The Pack went 2-4 at home in 2012, the last time it won just two home games in a season.

OFFENSIVE LINE INJURIES: Both the Wolf Pack and Fresno State lost arguably their best offensive linemen this season to injuries. Aaron Frost was the only Wolf Pack player named to the preseason All-Mountain West team but suffered an injury in August and has missed the entire season. Fresno State’s Dontae Bull was one of five Bulldogs named to the preseason All-MW team and suffered a season-ending injury (broken leg) two weeks ago.

AT STAKE FOR NEVADA: With just two games remaining (the Pack finishes 2022 at UNLV on Nov. 26) the Wolf Pack is simply searching for some momentum heading into the offseason. Nevada has lost eight games in a row for the first time since the 1964 team lost nine in a row.

AT STAKE FOR FRESNO STATE: The Bulldogs will clinch the West Division title and a spot in the conference championship game on Dec. 3 with a victory over the Wolf Pack. Fresno State has won five games in a row and has averaged 41.1 points a game over its last four.

WHAT NEVADA NEEDS TO DO TO WIN: Stopping Fresno State quarterback Jake Haener is a good place to start. Haener has completed 67-of-103 passes for 741 yards and four touchdowns the last two seasons combined against Nevada. The Mountain West preseason Offensive Player of the Year has completed 161-of-213 passes for 1,888 yards and 14 touchdowns this year in just 5 1/2 games. He missed four-plus games with an ankle injury suffered against USC in September. Since returning to the field three games ago Haener is 86-of-108 for 1,034 yards and 10 touchdowns. Stopping running back Jordan Mims also needs to be a Pack priority. Mims has 870 yards and 11 touchdowns this year and ran for 134 yards and a touchdown last year against the Pack. Fresno State’s defense ranks just seventh in the Mountain West in yards allowed (366 a game) and sixth in points allowed (23.6) and is certainly not as stingy as the Boise State defense the Pack saw last week. But the Pack offense, which averages just 19 points a game, simply does not want to get in a shootout.

WHAT FRESNO STATE NEEDS TO DO TO WIN: The Bulldogs simply need to keep their eye on the prize (a West Division title) and not overlook a struggling Wolf Pack team. The Fresno State offense this year (with Haener) is as explosive as the Wolf Pack offense a year ago and isn’t afraid to show it. The Bulldogs’ defense, though, has struggled with consistency this year. Oregon State and USC combined for 80 points against them while UNLV scored 30 on the Bulldogs last week and San Diego State put 28 on the board three weeks ago. If Fresno State jumps on the Pack quickly and builds an early lead, expect defensive end David Perales (9.5 sacks) to pin his ears back and zero in on the Pack quarterbacks.

PREDICTION: Fresno State 34, Nevada 20. It will be Senior Night for the Wolf Pack so emotions will run high. Those emotions could lead to an early Pack lead, especially if Fresno State is careless and overconfident. The Wolf Pack roster, though, simply cannot compare to the Bulldogs’ roster, especially on offense. Haener, Mims, Moreno-Cropper and friends are what the Wolf Pack offense wants to grow up to be someday.