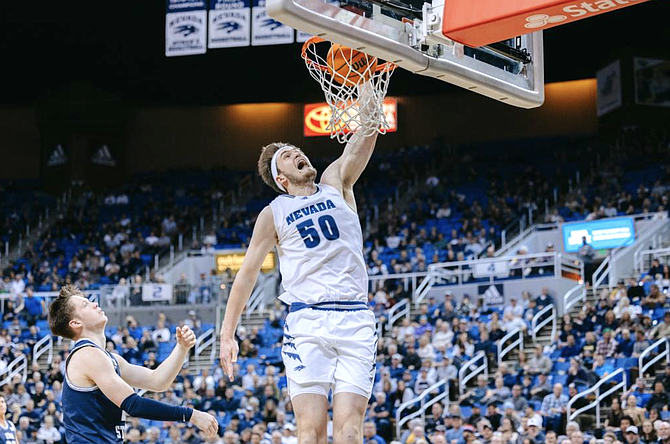 Jarod Lucas has never played a better overall game for the Wolf Pack than he did Friday. The 6-4 shooting guard, who played his first three seasons at Oregon State, finished with 21 points on 7-of-14 shooting, draining 3-of-6 threes and handing out four assists. At one point, with the Pack trying to keep its head above water in a difficult first half, Lucas connected on five consecutive shots from the floor, three from beyond the arc.

He scored 15 of his 21 points in the first half and then became an important facilitator in the second half with all four of his assists. Lucas even stopped firing up threes in the second half, which is not easy for him to do. It was a team-first, efficient and productive performance by Lucas and just what the Pack needed from the veteran guard at just the right times. How important was Lucas on Friday? He played all but 90 seconds of the 40 available minutes and never left the floor the final 29:20.

There simply might not be a better player in the Mountain West right now than Kenan Blackshear. The 6-foot-6 Nevada point guard certainly turned in arguably the best second-half performance in the conference this season Friday, scoring 19 points in 19 second-half minutes to finish with a career-high 28 points.

Blackshear, playing in his 50th career game at Nevada (his first 54 games were at Florida Atlantic), put the Pack on his back as he’s done so often this year. He also had five assists and a career-high five steals. It also might not be a coincidence that Blackshear turned in the best game of his career without attempting a single 3-point shot (where he is a 24 percent shooter this year), instead going to the line and sinking 10-of-11. Blackshear, over a game-changing stretch of 9:13 in the second half, made all five of his shots from the field and each of his five free throws for 15 points, helping turn a 51-46 deficit into a 70-64 lead with 6:19 to play. When Blackshear is at his best he might be the best in the Mountain West.

When Will Baker is special, well, so is the Nevada Wolf Pack. And Baker was as special as he’s ever been in his two-year Wolf Pack career in the second half on Friday. The 7-foot center scored 16 points in 14 second-half minutes, draining 7-of-10 shots to finish with a season-high 24 points in 26 minutes. He was 10-of-14 from the floor overall and 3-of-6 on threes to go along with six rebounds, a block, steal and assist. The only other time Baker scored 24 points in his three-year career (his first year was at Texas) was in his fourth game at Nevada on Nov. 18, 2021 against San Francisco. Baker, who had 15 points combined in his last two games, had more points Friday than he had in two games combined against Utah State (23) last year. Baker scored 11 points in a stretch of seven minutes in the second half to turn a 60-58 deficit into a 79-64 lead with 3:34 to go.

The Wolf Pack basically won this game without its 6-7 defensive specialist. Coleman played his fewest minutes (19) of the season because of foul trouble (four) and, well, the Pack didn’t need him. The Pack outscored Utah State, 48-33, with Coleman on the bench for 21 minutes as opposed to battling to a 37-37 tie with him for 19 minutes when he was on the floor.

Coleman was sent to the bench with his fourth foul and the game tied, 60-60, with 10:16 to play and he never returned. The Pack junior did have four rebounds to go along with his four fouls as well as a block and a steal. Coleman has now scored just one point in 77 minutes over his last three games combined (0-for-6 from the floor). But nobody asks him to score.

The Wolf Pack also didn’t need Williams to score with Lucas, Baker and Blackshear doing the heavy lifting in that area. So the 6-6 freshman smartly played the role of utility man, contributing all over the court where needed. Williams took just two shots and made them both to finish with four points. This was also the first game all year he didn’t launch at least one 3-pointer. He’s only scored less in two games this year (two against Pepperdine, three against Boise State). But, like with Coleman, forget his points. Williams’ four assists against Utah State led to nine Pack points and all five of his rebounds were followed shortly by Pack points. The offense feeds off his hustle. Williams also blocked shots by Max Shulga and Sean Bairstow in the paint. Williams six blocks (two) and assists (four) combined are his season high this year.

The Wolf Pack only needed Davidson for 17 minutes but the 6-8 freshman supplied eight points, four rebounds and an assist. He was also a perfect 2-of-2 on threes, cutting Utah State’s lead to 19-14 midway through the first half and giving the Pack a 52-51 lead with 14:50 to play. All four of his rebounds came in the first half with one of his two offensive rebounds leading directly to a 3-pointer by Lucas. Davidson played just 5:47 in the second half as the group of Trey Pettigrew, Baker, Blackshear, Lucas and Williams played so well down the stretch. But Davidson still scored five points and had an assist in the second half, keying a 10-0 run that saw the Pack turn a 51-44 deficit into a 54-51 lead with 14:18 to play.

One Trey replaced a Tre for the Pack on Friday. Pettigrew played the role of Tre Coleman almost perfectly, playing 22 minutes and missing his only two shots but also playing suffocating defense. He also had four rebounds, an assist and a block. Three of his rebounds and his block all came in a span of just 67 seconds late in the second half. When a bench player gets 22 minutes and doesn’t score, well, you just know he’s doing great things somewhere on the floor. The 6-3 Pettigrew played the final 10:50 of the first half and the final 11:13 of the second half, almost all with Coleman on the bench.

The 6-5 transfer from Seton Hall is struggling to contribute lately. He played just three minutes on Friday, his fewest of the season in 19 appearances. Powell had a rebound just eight seconds after stepping on the court but then he missed a 3-pointer and a jumper in the paint and also committed a foul to complete his three-minute appearance in the first half. Powell went to the bench with 8:09 left in the first half and never returned to the court.

Foster played just 10 minutes, didn’t take a shot and didn’t score, though he had two turnovers and a foul. His two turnovers came just 26 seconds apart during a brief 3:21 stretch on the court midway through the first half. His assist came on a Darrion Williams jumper with 21 seconds left in the half. Foster played just 3:28 in the second half without a stat.

Steve Alford just continues to out-coach his counterpart on the other bench. And he did it on Friday with little contribution (offensively) from his bench (just eight points) and just four points combined by two (Coleman, Williams) of his starters. Alford’s Pack this year, however, is writing a manual on how to go on a game-changing run at just the right time.

Against Utah State it was a suffocating 17-0 run that took just under six minutes, turning a 64-64 tie with 8:06 to play into a game-ending 81-64 lead with 2:19 left. It was nearly perfect Pack basketball as Nevada was 5-of-7 from the floor and 6-of-6 from the line and Utah State was 0-for-8 from the floor and didn’t even get to the line during the run. The Pack was awful in the first half on defense and, when it counted most, nearly perfect in the second half.

Alford knows as well as anyone he doesn’t have unlimited bullets with this team but so far he’s pulling the trigger at exactly the right time more often than not.

Talk about Running with the Pack. That, without a doubt, is the theme of this year’s team. The 25-0 run over the final 10 minutes of the first half at San Jose State on Jan. 7 (in a 67-40 win) was unbelievable. But the 17-0 explosion starting with about eight minutes to go on Friday was only slightly less incredible.

The Pack is now 15-4 on the year (5-1 in the Mountain West) and, it feels, has come up with 15 different ways to win a game. Against Utah State it was Lucas, Blackshear and Baker seemingly, almost on demand, deciding to give their best performance of the year all on the same night. Utah State, much like San Jose State just six days earlier midway through the first half, was totally unprepared for what hit them Friday late in the second half. But this Wolf Pack team is simply nasty and responds to its coach. This Pack group, now 9-0 at home, has developed an ability to flip the switch and bring out a lethal killer instinct not seen in many Pack teams in recent years. That only happens when a team plays together with the same purpose and mindset.