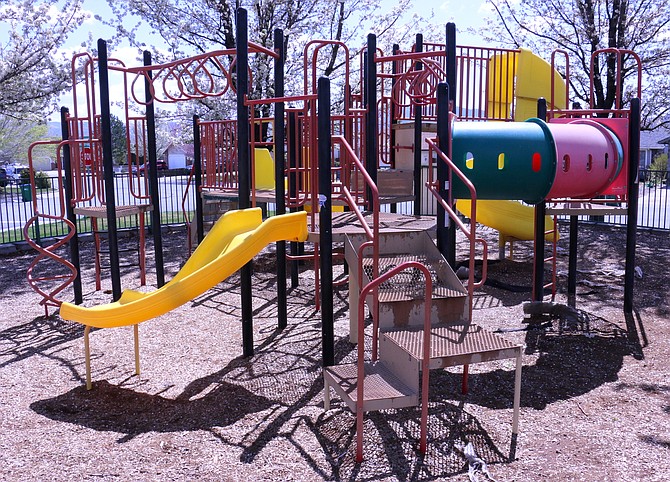 The Blackwell’s Pond playground at 2317 Northridge Drive would be the first in the proposed 10-step plan of the city’s 18 locations to receive attention. (Jessica Garcia/Nevada Appeal)

Carson City’s 18 playgrounds bring joy and relaxation for an average of about 3,000 citizens per location. But they’re also a potential liability to the city if anyone gets hurt using any one of them.
The Parks and Recreation Commission is deciding how best to properly maintain each location and whether to reduce the total number in its park system, according to a discussion at its April 6 meeting.
Playgrounds typically last about 20 years, and the city’s existing sets already are approaching this age, according to staff reports. As of 2019, there were 54,773 residents in Carson City – about 3,043 per playground. Douglas County currently has about 8,166 residents per playground. Reducing five playgrounds to 13 in Carson City would double Douglas County’s facilities per capita.
Parks project manager Nick Wentworth told the commission that city staff has identified the sets most frequently used or appreciated by the public to decide which should be invested in for safety.
“It can be a huge liability if they’re let go beyond (20 or 25 years) or also turn into a real hazard for the community and also unnecessary phone calls,” Wentworth said.
The city has used funds from its Capital Improvement Program in the past five years to inspect and maintain or retrofit the equipment at the various locations to comply with standards. The city is considering funding sources such as its Residential Construction Tax and Quality of Life funds as well as grants and general fund to cover expenses for replacement.
Wentworth, a recently certified playground safety inspector, said last week he has met with another certified city staff member multiple times to determine which playgrounds remain in the best condition.
Improvements recently made to parks at Schulz Ranch (Race Track Road and Wheeler Peak Drive), Ross Gold (280 Appion Way), Ronald D. Wilson Memorial (499 Mark Way) and John Mankins (3051 Oak Ridge Drive) have brought these areas up to Americans with Disabilities Act standards. Of the 18 playgrounds, 13 still use wood mulch for fall protection, staff reports indicate, and this is not ADA accessible. Citizens who use parks have expressed this is not desirable.
Long Ranch (Longview Way and Waterford Place), Carriage Square (1099 Cabrolet Drive), Mills Park (1111 E. William St.), Pete Livermore Sports Complex (1555 Livermore Lane) and Blackwell’s Pond Park (2317 Northridge Drive) have been identified as the most desirable existing playgrounds, with Pete Livermore being highly used for youth activities and sports. Mills Park has been recommended for a larger structure. Carriage Square and Long Ranch frequently are used and have been recommended for improvements.

To determine the best use of the playgrounds and maintain a balanced geographical approach while reducing the total number in the city’s inventory, Wentworth said a draft 10-step plan proposes fiscal responsibility and could help mitigate potential liability.

The specific plan, Wentworth outlined to the commission, is:

Parks and Recreation Director Jennifer Budge said there is enough funding to allow for the replacement of a playground.
Wentworth said the proposal, entitled "Long-Term Plan Towards Better and Safer Playgrounds," is expected to go before the Board of Supervisors in June.
“We are still waiting on feedback from the presentations to the Parks and Rec Commission as well as the need to finalize some other agreements and final details that will help determine some of the design elements,” he told the Appeal on Wednesday. “By identifying the most used and most popular playgrounds, we hope to have more strategy in which structures we should be investing in by eliminating a few that are underutilized.”