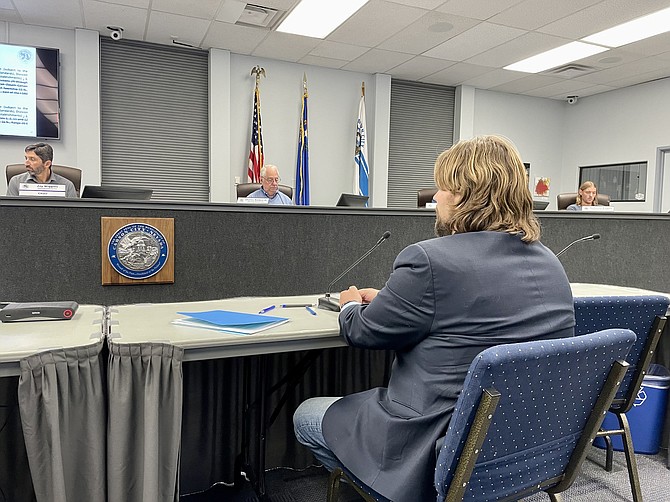 Will Adler, representing Green Thumb Industries, talks about the challenges of opening a new marijuana store in Carson City at the Oct. 26 planning commission meeting.

More than a month after the Carson City Board of Supervisors voted to allow more retail marijuana shops in Carson City, the Planning Commission pumped the brakes on a proposal to expand zones within the city where they can operate.

On Wednesday, planning commissioners continued a hearing on a new ordinance to open all general commercial and industrial zones in the city to marijuana shops. The item was continued to a date uncertain but is expected to return either in November or December.

Currently, retail and medical dispensaries are restricted to parts of South Carson Street and the eastern stretch of Highway 50. These limited areas are zoned either general commercial or general industrial.

“Isn’t it better to do this surgically than cast a giant net?” said planning commissioner Richard Perry.

Perry was concerned such a sweeping change would open scenarios “we didn’t even think about.”

“It’s opening a can of worms we don’t know the impacts of,” he said.

The request came from Green Thumb Industries, which owns the RISE dispensary in Carson and holds an additional license. State law allows four licenses for Carson City. After state-wide legalization of recreational marijuana in 2016, the city limited the number of retail shops to two and used the location requirements from a 2014 ordinance. That ordinance focused on medical dispensaries at the time and required a special use permit for medical outfits. The special-use requirement was later extended to retail shops.

On Sept. 15, the Board of Supervisors approved expanding the number of retail establishments from two to four to match state law but did not change location requirements.

Will Adler of Silver State Government Relations, representing Green Thumb, said Wednesday that current allowances are too restrictive and present a hardship for a new industry. He pointed to new state regulations that prohibit dispensaries near casinos, not to mention city setback requirements stipulating distance from schools and other public places.

“The current zoning bubbles are too restrictive,” he said.

Adler said Green Thumb is seeking an additional store but having a hard time finding available property that meets all the requirements. To compound the challenge, the company must show significant progress on the second storefront by February 2023 to maintain their additional state license. They also hope to separate the new store from the existing Rise in south Carson.

“The drive of this is to place the license somewhere in Carson City, truly,” he said. “It’s economically desirable to spread them out.”

Community Development Director Hope Sullivan explained the applicant didn’t provide enough justification for the change but saw a benefit in “vetting the request” and providing feedback to the applicant.

On Oct. 25, on the day before the planning commission meeting, Adler revised the request to add retail commercial as a zone in which marijuana shops could be set up — under conditional use — but because of agenda noticing requirements, the additional request couldn’t be discussed Wednesday.

Adler admitted the application was a bit rushed. The continuance approved Wednesday will allow all proposed changes to be bundled and return to the commission for consideration. Ultimately, the commission’s recommendation will go to the Board of Supervisors.

“Their request gives off an odor of ‘bait and switch,’” Goldeen wrote. “I’m sure the Board has its reasons for the present rules. Nothing has changed that they should be reviewed.”