Vaqueros fall to Fallon 48-19 in 3A East football 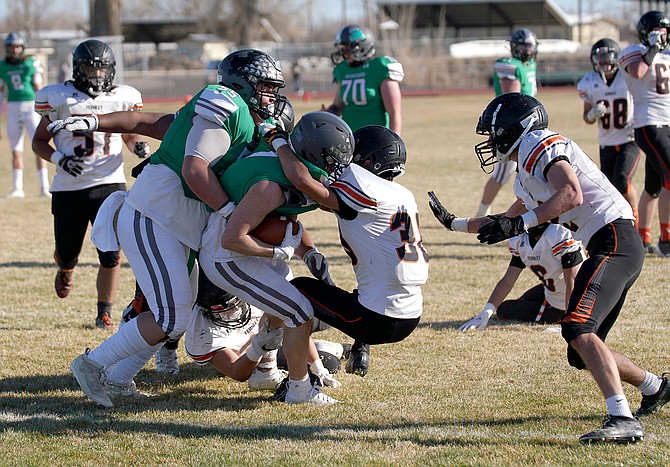 The wait was worth it for the Greenwave and head football coach Brooke Hill.

After 504 days since their last 3A encounter, the two valley rivals faced each other for the first time on the gridiron since Nov. 23, 2019, when the Vaqueros upset the Greenwave, 24-20, to capture their first state football title in 56 years.

Saturday’s late afternoon 3A East game, though, wasn’t as close with Fallon’s 41-18 win. Yet, the intensity and hard-fought play brought out the best of both teams at the Edward Arciniega Athletic Complex on a picturesque spring day. Because Fernley’s field was heavily damaged by a flash flood last September, the game was considered a home contest for the Vaqueros. 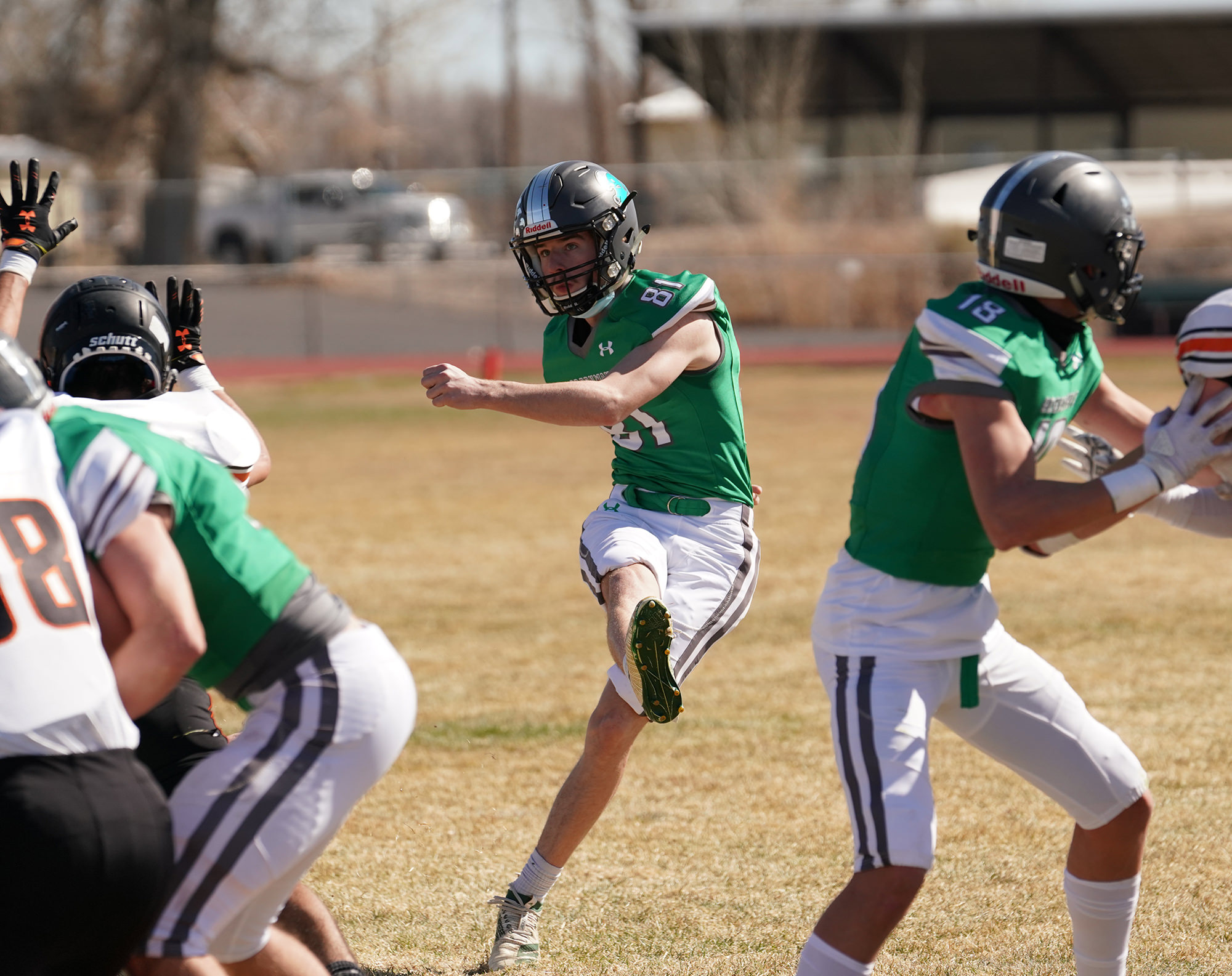 What the Vaqueros (2-2) discovered was, though, was a strong rushing game for Fallon (3-0) that the Wave didn’t have the last time the teams met. Levi Andrews rushed for 171 yards on 25 carries and scored five touchdowns, and quarterback Avery Strasdin broke loose for 102 yards on13 carries. Colby Malkovich gained 34 yards on five carries and scored the Greenwave’s final touchdown.

“Levi had a big game with the five touchdowns,” Hill said. “Strasdin did a good job.”
Hill credits the offensive line for Fallon’s successful running game against Fernley.

“Jace Nelson, Cade Barton and Keith Heckathorn did a good job to contain their quarterback in the option,” Hill said.” We tackled well, and I felt the defensive line did a good job.”

Andrews punished the Fernley defensive line with his shifty running and speed. The Fallon senior crossed the goal line four times in the first half and once in the second half. His longest run to the end zone came with 10 seconds remaining in the first quarter on a 30-yard run.

The Wave had a few surprises up their sleeve. Kicker Sam Robertson squibbed the opening kickoff, and Barton recovered the fumble at the Fernley 20. Four plays later, Andrews slanted toward the right side and outraced the Vaqueros’ secondary to the goal line. Robertson, who successfully kicked the extra point after the first five touchdowns, split the goal posts with 9:33 left in the quarter.

On the kickoff, Robertson attempted another squib kick, but Tyler Slaughter dove on it. Fernley took over on its 30, but four plays later, the Vaqueros punted to Fallon’s Tyler Austin, who brought the punt back to the 48.

The key play came on a first and 10 from the 36-yard line. Strasdin faked a handoff and ran to the outside for a 32-yard gain. Andrews then scored on the next down from 4 yards out midway through the quarter.

The Greenwave defense held Fernley on the Vaqueros’ next series. On fourth down, Fernley punted, but the ball glanced a Greenwave player, and the Vaqueros recovered on the Fallon 32. Fernley quarterback Julian McIntyre hooked up with receiver Carson Kingston with a 36-yard strike, and Brandon Reyes carried the ball for a 3-yard score on the next play. 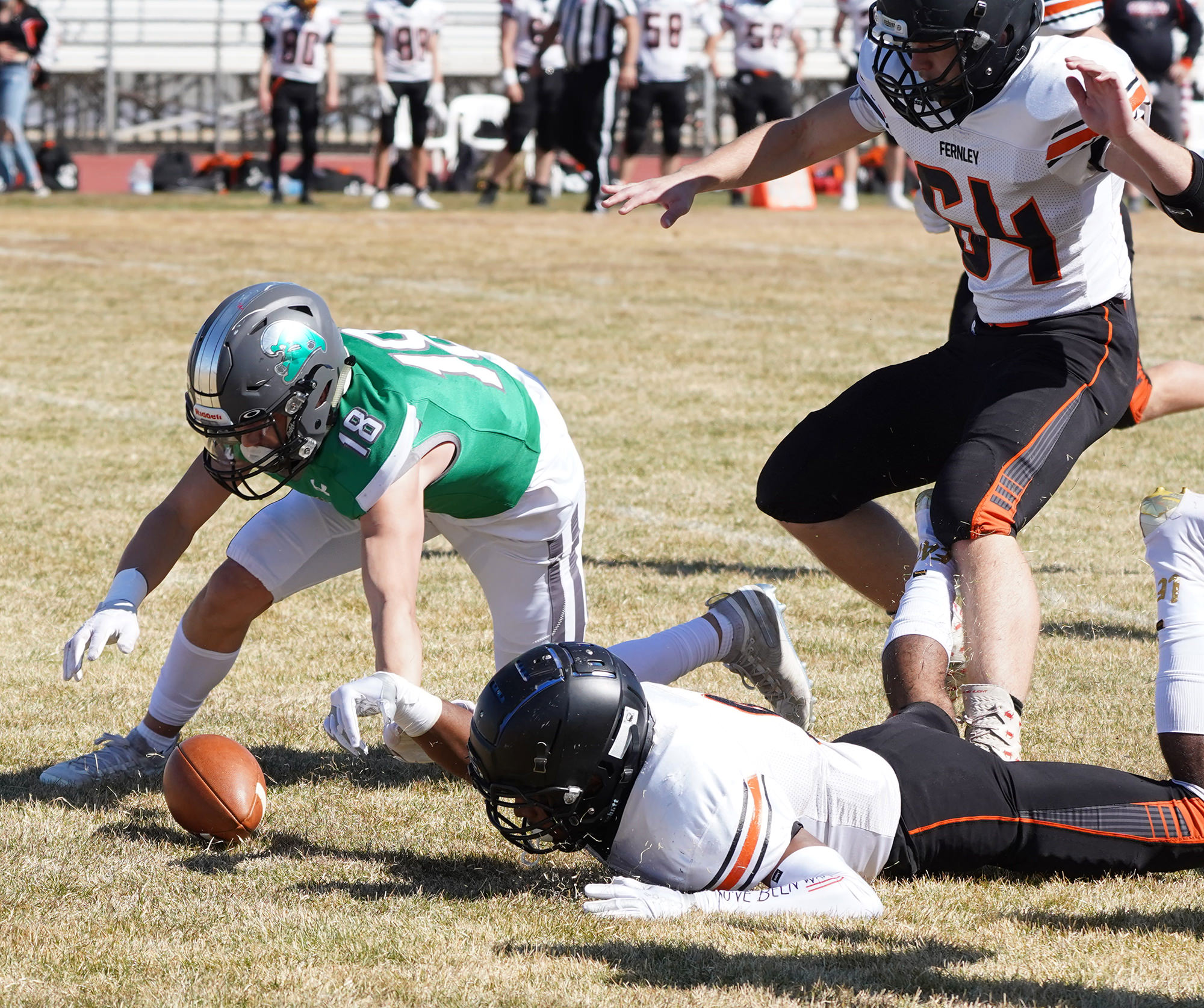 After the kickoff, Fallon took over on its 30 and mounted an eight-play drive. With seconds left in the quarter, Andrews slipped out of a tackle near the goal line and scored. With the kick, Fallon led 21-6 going into the second quarter.

Fallon scored again on another long drive after Fernley punted after four downs.

Taking over at midfield, Fallon progressed on an 11-play drive. Fallon moved down to the 16, and Colby Malkovich carried the ball twice to the 8-yard line. Two plays later Andrews barreled in from the 2-yard line with 4:52 remaining before halftime.

The Vaqueros repaid the favor on their next possession.

McIntyre guided Fernley on the ground with its first three plays before he found Kingston at midfield a 35-yard bomb in double coverage. Fernley moved to the 3 when Reyes scored again, this time on a 3-yard run standing up to cut the lead to 28-12 going into halftime.

The Vaqueros scored again in the third quarter to trail 28-18. On Fernley’s second possession, the Vaqueros churned up the field with a number of short plays until Brandon McCullar’s 38-yard touchdown on a pitch. The 2-point conversion failed.

Andrews had an 8-yard score shortly after the fourth quarter began, and Malkovich bulldozed his way in from the 1-yard line with 2:22 remaining in the game.

Overall, Hill said the state championship game in 2019 provided a lesson for the Wave. Hill said the Vaqueros beat up the frontline. This time, though, Hill said the defense played much better except for Thompson’s long run.

With its third win of the abbreviated COVID-19 season, Fallon now entertains Lowry on Saturday at 3 p.m. Lowry began the season 2-0 but has slipped, losing to Fernley in a blowout, 50-21 in a home game, and 30-29 on the road at Spring Creek.